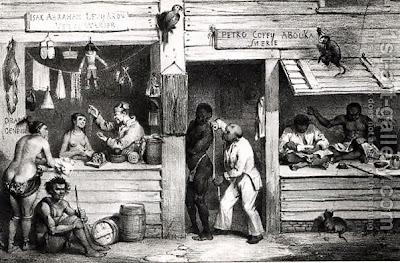 It appears that the Surinamese Slaves were exported from an African area that nowadays is known as Ghana. The Slaves used to name their children corresponding the days that they were born. The name of a child was dependant of the day that it was born. This habit was inherited from their African ancestors. For instance: If a boy was born on a Friday, his name would be Kofi (Think of United Nations Secretary General Kofi Anan) and if a boy was born on a Wednesday, he was called Kwakoe (Kwaku). Here is a survey of the names belonging to a certain day.
Day of the week Name given to a boy (male) Name given to a girl (female)

Sunday Kwasi /Kwasiba
Monday Kodyo (Kodjo) /Adyuba
Tuesday Kwamina /Abeniba
Wednesday Kwaku (Kwakoe)/Akuba
Thursday Yaw /Yaba
Friday Kofi /Afiba
Saturday Kwami /Amba
[Credit: http://www.troon.org/suriname/daynames.html#childnames]
Written by Peter A.J Troon..
Ghanaian / West African Names
Below is an overview of the names as they are given to new born children in Ghana, West Africa. For instance: if a boy was born on a Monday, he will be named Kojo or Kwadzo. An interesting thing is that in Suriname a similar habit exists under the descendants of slaves. Descendants of slaves who had run away use similar names. This is no big surprise, because the former slaves of Suriname were imported from West - Africa.
Day of the week Possible names to give to a boy Possible names to give to a girl
Sunday Kwesi, Kwasi / Esi
Monday Kojo, Kwadzo Adjo /Adjua, Adzo
Tuesday Kwabla, Kwebena /Abena
Wednesday Abla, Kweku, Kwaku /Akua
Thursday Yao, Yawo /Abba
Friday Kofi /Afi
Saturday Kwame, Kwami /Ami, Ama
[Credit: http://www.troon.org/suriname/africannames.html]
Posted by Fashion et al at 15:50