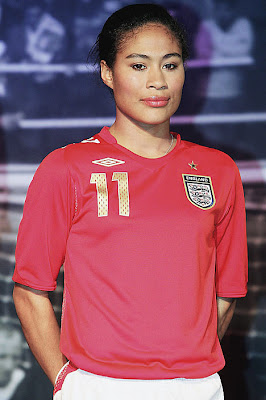 Did anyone watch the English women’s football team last night? If you did, you’ll have seen the ever-fabulous, Rachel Yankey MBE –number 11 at her best. The following is a bit more about Ms Yankey, a player for Arsenal and England.


Rachel Abba Yankey, MBE (born 1 November 1979) is an English football player. She plays for the English side Arsenal, and for the England national team. She plays as a forward, and wears the number 11 for Arsenal and England. She is of Ghanaian descent, from her father's side.

Yankey began playing football with a boy's team, before joining Mill Hill United at youth level. Her playing career began at the age of 16, playing for Arsenal, when she spent a short time on loan with Laval Dynamites, a Canadian team, and then moved to Fulham. It was here that she was registered as the first professional female footballer in England. She joined Birmingham City before the 2004–05 season, and then, after being released from Birmingham, rejoined Arsenal for the 2005–06 season after a short spell with the New Jersey Wildcats of the W-League in the United States. She, along with England team mate Rachel Unitt, played for the Wildcats for the last seven games of the season, and helped them win the W-League championship.

In May 2009, Yankey was one of the first 17 female players to be given central contracts by the Football Association.[5] In August 2009 she was surprisingly left out of coach Hope Powell's 22-player squad for Euro 2009[6] with Powell believing that she didn't justify a call-up, and Yankey also did not get called up for the World Cup qualifiers against Malta and Turkey. But after a return to form with the Arsenal Ladies, she was recalled by Powell for the four-nation Cyprus Cup and won her 90th and 91st caps as a 76th minute substitute for Jessica Clarke in a 1-0 win over South Africa and as a starter in a 1-0 defeat to Canada.

Her return to form at both club and international level saw her being picked regularly again by Powell, and on 29 July 2010 Rachel Yankey became the second Englishwoman after Gillian Coultard to earn 100 caps during a World Cup Qualifier against Turkey. Yankey, who was captain for the night, scored a goal and played the entire 90 minutes as England won 3-0. (credit: http://en.wikipedia.org/wiki/Rachel_Yankey)
Posted by Fashion et al at 04:04