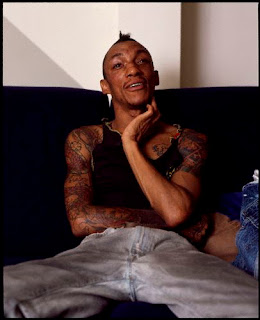 (Credit: Tricky (Adrian Thaws) © Sal Idriss / National Portrait Gallery, London)....Did you know that Tricky's a quarter Ghanaian via his late mother, Maxine Quaye?
﻿There is a certain feel about the work of Kumasi born photographer, Sal Idriss that truly captivates, -I hope to work with him someday. Currently working in the music and film industry capturing images of black figures in mainstream culture like artist -Chris Ofili, architect -David Adjaye, the late great Malian photographer -Malick Sidibé, politician –Paul Boateng, fashion designer - Joe Casely-Hayford and actress - Sophie Okonedo (to name a few), he has also worked for publications like: the Guardian, The Times, the Mirror, GQ magazine, Mojo, Scotland on Sunday and ES magazine –and the likes of; fashion house -Commes Des Garcon, the National Portrait Gallery and City Hall.

Idriss has just completed a moving exhibition of his work entitled ‘Famous For The Wrong Reasons’ –a photographic exhibition aimed to educate and deter those vulnerable to gun and knife crime; inspired by the artist’s own experience and a tribute to his brother Nassirudeen, who died in 2007 as the result of an unprovoked knife attack in Islington, a few days before his 17th birthday. ** I’m so sorry that I didn’t find out about this exhibition sooner, –anyway it is over but you can still view some of the photographs from this exhibition at: http://www.richmix.org.uk/aandc_famousforthewrongreasons.htm

"Delays occur in our lives because God wants us to experience certain tests. He allows us to be tested by delaying certain things. He searches us to know what is in our hearts. He wants to see our response to delays. Many good people become evil during the period of delay. Remember today that a DELAY is what will bring out what is truly in you! Deut 8:2. Be blessed"


**Yep, I know all about delays!… For more information about evangelist Dag Heward-Mills visit: http://www.daghewardmills.org/
Posted by Fashion et al at 08:47 No comments: 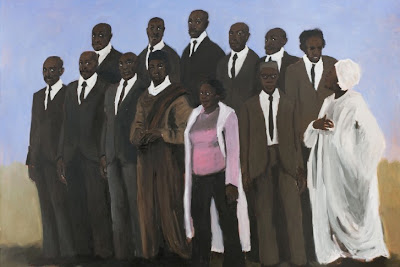 Photography: Kwaku Alston
To be perfectly honest, I have no idea if uber photographer Kwaku Alston is Ghanaian/of Ghanaian origin or not -but I do know that he is talented and I hope to work with him -someday. I stumble across his work in the latest Issue of Marie-Claire magazine and was pretty impressed (plus my father’s called Kwaku –and they tend to be nice)…

Kwaku’s at the very top of his game and has photographed the likes of: Nelson Mandela, Barack Obama, Oprah Winfrey and Tiger Woods, -worked for hot publications like: The New York Times, Rolling Stone and Essence magazine–and advertising for: Coca Cola, Blackberry and Target, -and is presently showing at the Studio Museum of Harlem –as part of their Harlem Postcards - Fall/Winter 2010/11 show (showing until 13th March 2011).

Good News: Ghana on track to halve hunger by 2015

According to the following piece by Melissa Britz Ghana is well on its way to meeting the Millennium Development Goal target of eradicating extreme poverty and hunger by 2015, according to a study by Britain's Overseas Development Institute…yippee!
Written by: Melissa Britz

Ghana is well on the way to meeting the Millennium Development Goal target of eradicating extreme poverty and hunger by 2015, according to a study by Britain's Overseas Development Institute.


The study forms part of a series of profiles on countries around the world that, in the words of the institute, are "bringing to light key lessons to inform development work leading up to 2015."

It said in its study: "With agricultural growth averaging more than five percent a year during the past 25 years, Ghana is ranked among the top five performers in the world. This has contributed to major reductions in poverty and malnutrition ..."

To reduce by half the proportion of people living on less than a dollar a day;

To achieve full and productive employment and decent work for all, including women and young people; and

To reduce by half the proportion of people who suffer from hunger.

The report goes on to say that Ghana is largely self-sufficient with in staple foods.
Marc Hofer/UNESCO

Children at a rural school.
"Food supply has grown faster than the population has... At the same time, the real price of food has fallen. More accessible food meant that undernourishment went down to eight percent by 2003, from 34 percent in 1991. Child malnutrition has also declined, with the proportion of infants underweight falling from 30 percent in 1988 to 17 percent in 2008."

According to the study, some challenges, such as production efficiency and making agriculture environmentally sustainable, still remain.

The Overseas Development Institute is an independent think tank on development and humanitarian issues which says it "aims to inspire and inform policy and practice which lead to the reduction of poverty, the alleviation of suffering and the achievement of sustainable livelihoods in developing countries." THE END

Guardian.co.uk also looked at this story and has uploaded an accompanying film clip that can be viewed at: http://www.guardian.co.uk/global-development/video/2010/oct/15/ghana-development-progress-odi-video
Posted by Fashion et al at 07:14 No comments: 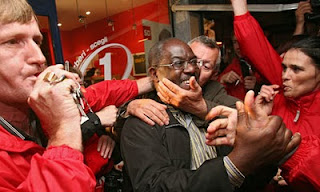 ﻿Peter Bossman and some of his supporters celebrate his victory in the Slovenian Adriatic town of Piran. (Credit: The Guardian)
A Ghana-born doctor nicknamed "the Obama of Piran" became the first black mayor in eastern Europe yesterday after he was elected in Piran, south-western Slovenia.

Peter Bossman, 54, said he was "happy and proud" to have been elected to the post after winning a second round runoff in the town with just over half the votes.

Bossman settled in Slovenia, then still part of Yugoslavia, in the 1970s after arriving in the country to study medicine. He decided to stay after marrying a fellow student from Croatia.

Speaking about his campaign, in which he said he would introduce electric cars to the town, Bossman said: "I based my campaign on a dialogue, and I think the dialogue has won."

But Bossman was criticised during the campaign for not speaking fluent Slovene, the country's official language, prompting him to say in an interview with Delo, one of Slovenia's leading newspapers, that a friend and professor of Slovenian had "offered to give me additional lessons".

However the new mayor, who runs his own private medical practice and is a member of Slovenia's governing centre-left Social Democrat party, said he had not suffered racial discrimination.

"In the first months after coming to Slovenia I felt that some people did not want to be with us [African immigrants]. But for the last 10 or 15 years … I have no problems at all and I think people no longer see the colour of my skin when they look at me," he said.

Vlado Miheljak, a political analyst, said the vote in Piran was a test of whether Slovenia was "mature enough to elect a non-white political representative." (Credit: http://www.guardian.co.uk/world/2010/oct/25/peter-bossman-first-black-major-eastern-europe-slovenia)
Posted by Fashion et al at 06:40 1 comment:

Is Linda Annan the most fashionable Ghanaian woman in the world? 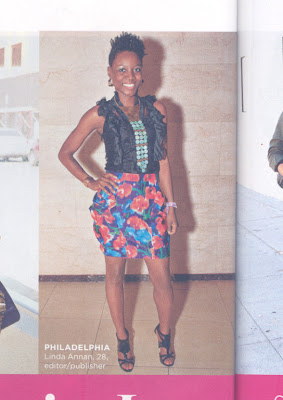 As you all know by now, I like to be uber abreast of all that’s hot concerning the GH community –and it doesn’t come any hotter than Linda Annan right-now! I happily stumbled across the above photo of Linda in Essence Magazine’s October 2010 Issue and just had to google this fabulous fashionista… It transpires that Ms Annan is the editor and publisher of Obaasema Magazine and a blogger –just like me! You can find out more about Linda at: http://consciousafricanwoman.blogspot.com -For more information about the latest copy of Obaasema Magazine visit: http://www.obaasema.com/﻿﻿
Posted by Fashion et al at 04:44 No comments: 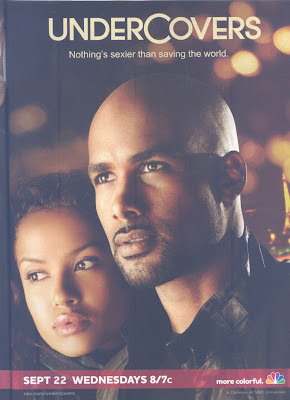 ﻿I was wondering, -when will Undercovers reach these shores? For more information visit: http://www.nbc.com/undercovers/
Posted by Fashion et al at 04:17 No comments: 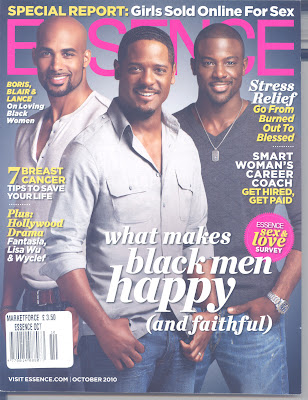 Boris Kodjoe on the cover of Essence magazine’s October 2010 Issue (with Blair Underwood and Lance Gross).... fabulous x﻿
Posted by Fashion et al at 03:15 No comments:

I was pleasantly surprised to see a ‘facebook’ friend of mine on OBE TV this morning, and even more impressed when I heard his tune, ‘Somebody’ featuring Kwabena Kwabena, -it’s very touching and I can honestly say that I’m now a big fan of Desmond Kwesi Blackmore -aka D Black (plus, he not only looks like my little brother, but is also called Desmond)…Go Des... For more information about D-Black or to download ‘Somebody’ visit: http://www.dblackmuzik.com/bio.html

You can also download it here at: http://www.torrents.net/find/d+black+ft+kwabena+kwabena/
Posted by Fashion et al at 05:50 No comments:

“When I started the Mobo (music of black origin) awards 15 years ago, I was told that to be taken seriously, I should tie my hair back and not wear make-up. But that’s not me –I like my hair wild, and I like my femininity, and I’ve never gone without either.” kanya King 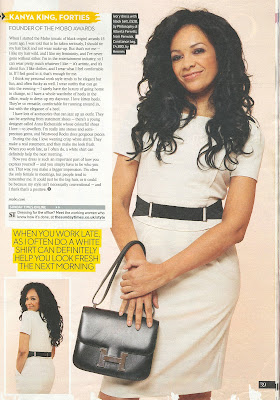 I can no longer access my paulina_448@hotmail.com address folks! I can only be contacted/reached via my nanaaba69@hotmail.co.uk account –right now. I’m kind of gutted as I no longer have the various emails you guys have been sending me over the past year and a half, -anyway (as always), if you have any news, events or any other fabulous info/happenings concerning the Ghanaian community globally –do get in touch via my nanaaba address…


Thanks
Paulina x
Posted by Fashion et al at 08:49 No comments: