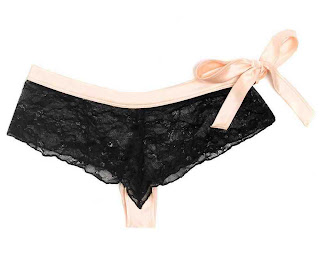 “Zimbabwe: if you were after a new pair of knickers, chances are you’d pop into M&S. But what if you had to visit a flea market to get your hands on your smalls? That’s the reality for many women in Zimbabwe, who the government believe are risking their health by buying hand-me-down briefs. So a new law has made it illegal to deal in any form of second-hand undergarment. “wearing used underwear is most dehumanising and no government should allow its citizens to be abused to this extent,” said the country’s finance minister, Tendai Biti.

Zimbabwe is not the first African country to outlaw the sale of used knockers. Ghana’s government officially banned the practise in 1994.”   Stylist magazine (1-2-2012)
Posted by Fashion et al at 14:10