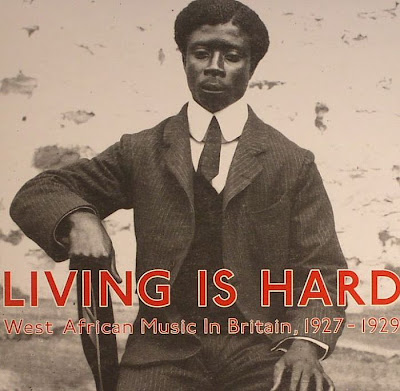 “Made in London, these recordings were issued originally by the Zonophone record label over three years from late 1927.... -recorded in almost all its major languages. Included here are Wolof, Temni, Yoruba, Vai, Fanti, Hausa, Ga and Twi. The records were recorded and manufactured in London: all of them were sent to West Africa, where few have survived...... not much is known about the artists behind these recordings. We can dig up scraps from Zonophone catalogues, public records, the internet: ....we know the fine lead guitarist with the Kumasi Trio, Kwame Asare (like Ben Simmons) hailed from the town of Saltpond, in Ghana, and later, in the 1940s, he recorded again under the name Jacob Sam for HMV in Ghana — just as Harry Quashie made two records for the company in London the following decade, with Awotwi Paynin And His Ghana Rockers.


And we can speculate about names, and references in the lyrics. With his Portuguese name (like Justus), perhaps Douglas Papafio was a West African slave returning from Brazil, after emancipation; or maybe a descendant of the Portuguese and Brazilian slave traders on the West African coast. His song praises and defends a resident — named Sakyi — of Mampong, in Ghana. Presumably the name de Heer is a legacy of the Dutch colonial presence on the Gold Coast. His song Edna Buchaiku relates a regional dispute between the towns Tarkwa and Elmina (which he appears to praise at the start). Elmina was held by the Dutch from the 1630s till 1872, and another de Heer was the Dutch representative there at the turn of the 1850s — so is it Nicholas de Heer’s hometown?


More concretely, with the exception of the Ga and Kumasi groups (which found local sponsors for the voyage from Ghana to the London studio), it is probable that most of the musicians were more or less resident in Britain at the time of these recordings. Students in their number were likely domiciled in such cities as London, Edinburgh, Belfast and Durham; the rest in amongst West African populations, which were concentrated in the working class districts of port towns.


For sure, the only address entered on the recording contracts is that of Daniel Acquaah (from Ben Simmons’ ensemble), in Liverpool — Caryl Street, Toxteth, hard by the docks. There is no trace of these artists in contemporary mainstream musical publications, so presumably performances too were restricted to these communities. And it seems only the Kumasi Trio went on post-Zonophone to successful recording careers back in West Africa: when HMV arrived on the Gold Coast in the mid-30s, it was only Kwame Asare of the artists here who recorded for them, suggesting that the others — at least most of them — had remained abroad.” www.honestjons.com www.honestjons.com