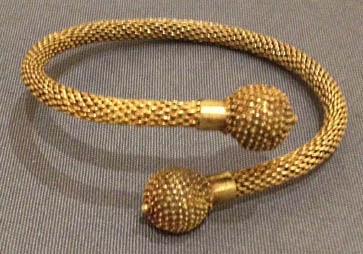 This ring combines Akan/Asante and European jewelry designs. It was made by an Akan/Asante metal-smith working in the gold-rich forest region of what is now Ghana, formerly known as the Gold Coast. Similar rings appear in nineteenth century British jewelry catalogues.

The ball-tip bracelet is of European origin, but its ornamentation, resembling plant buds, is of Akan/Asante invention. The subject matter of Akan/Asante art includes the flora and fauna of the local environment; objects of daily life; and images of Akan people involved in social, religious, and political interactions. While this work of art dates to the nineteenth century, its history is linked to that of the West African empires that rose to power more than 1000 years before.

The modern nation of Ghana is named after the Empire of Ghana founded during the eighth century. For many centuries before the rise of the Akan states and the founding of the Asante Kingdom, gold was mined in West Africa south of the Sahara and gold was the basis for the trans-Saharan trade. Akan states developed toward the beginning of the fifteenth century stimulated by the demand for gold on the world market. By 1482, Europeans began to establish trading forts in coastal Akan areas. Akan states exchanged gold for slaves to clear the forest and mine or pan for more gold.

By about 1500, Akan peoples exported more than 1000 pounds of gold each year. As gold trade routes shifted from the Sahara to the coast, Akan royal courts became the most splendid in Africa. The Asante confederacy was formed at the end of the seventeenth century. On March 6, 1957, Ghana became the first sub-Saharan African nation to regain its independence.

Paulina says: It blows my mind the amount of treasures of Ghanaian origin found outside of Ghana. Will we ever value our historical treasures.... Can't the Gods-that-be in Ghana put their hands in the pocket and buy back some of these treasures and put them in some museum somewhere in Ghana!!!!!
Posted by Fashion et al at 11:47