Could Cardinal Peter Turkson be the Next Pope?


Title:Who will be the next pope?
The contenders for Vatican's top job

Two cardinals from Africa, a Canadian and an Italian are among those being tipped to succeed Pope Benedict XVI 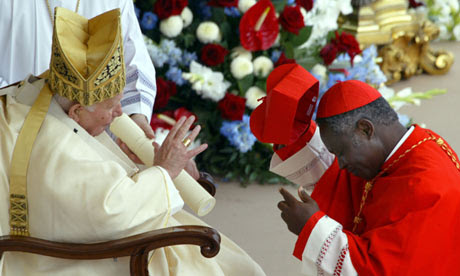 Cardinal Peter Turkson gets his red hat from Pope John Paul II. The Ghanaian is one of the cardinals tipped to succeed Pope Benedict XVI who is stepping down. Photograph: Vincenzo Pinto/AFP/Getty Images
With Pope Benedict XVI's resignation, speculation about who might succeed him when the conclave meets in March has begun. Any baptised Roman Catholic male is eligible for election as pope, but only cardinals have been selected since 1378. Among those who have been mentioned as potential successors are the following:

A TV star, "people's person" and a "wonderful" priest, the Ghanaian cardinal emerging as a strong favourite for the papacy is described by colleagues in glowing terms. Peter Turkson, who is president of the Vatican's pontifical council for justice and peace, was made a cardinal by Pope John Paul II in 2003 after serving for almost 30 years as an ordained priest.

Turkson was born on 11 October 1948 in Nsuta-Wassaw, a mining hub in Ghana's western region, to a Methodist mother and a Catholic father. He studied and taught in New York and Rome before being ordained to the priesthood in 1975. In 1992 he was appointed archbishop of Cape Coast, the former colonial capital of Ghana and a key diocese.

As archbishop, Turkson was known for his human touch, colleagues said. "We love him," said Gabriel Charles Palmer-Buckle, the metropolitan archbishop of Accra, who was made archbishop in Ghana at the same time as Turkson and has known him since school. "For Ghanaians he was our first cardinal, and to be made cardinal in his 50s was a big feather in our cap. Since then he has shown himself to be a church leader and a young cardinal breaking new ground."

The Rev Stephen Domelevo, from the Ghana Catholic communication office, said: "Cardinal Turkson is a wonderful person, very down to earth and humble. He lived in a simple way, and he was someone people felt very comfortable with. He is excellent at communicating scripture in a way that people really understand. He speaks many local languages – as well as European languages – and uses jokes and humour to really portray messages to people. He has that human touch."

Turkson speaks his native Ghanaian language, Fante, as well as other Ghanaian languages and English, French, Italian, German and Hebrew, as well as understanding Latin and Greek. "Cardinal Turkson likes to be able to joke with people in their own languages," said Domelevo. "It would not surprise us in Ghana if he were to be the next pope. He has what it takes. It would really be a gift to the church."

Turkson's popularity in west Africa has been boosted by his regular television appearances, particularly a weekly broadcast every Saturday morning on the state channel Ghana TV. He has maintained strong ties with his native country while carrying out his duties in the Vatican. "Cardinal Turkson has kept up his links with Ghana," said Palmer-Buckle. "He comes home as and when his duties allow. He has served as chairman of the national peace council, he has been on the board of our university – he is a very Ghanaian cardinal."

However, Turkson has not been immune to controversy. He sparked outcry last year when he screened a YouTube film at an international meeting of bishops featuring alarmist predictions at the rise of Islam in Europe. The clip, titled Muslim Demographics, included claims such as: "In just 39 years France will be an Islamic republic."

Benedict XVI also attracted the ire of Muslims after a 2006 lecture in Regensburg, his former university, in which he used a quotation to suggest that contributions made by the prophet Muhammad were "only evil and inhuman". Ghana, whose population is roughly 63% Christian – including around 11% Catholic – and 16% Muslim, is known for its relative tolerance and peaceful co-existence between Muslims and Christians.
Colleagues in Ghana voiced approval for Turkson's stance on social matters, but said he would be unlikely to take the church in a radical direction on contentious issues such as abortion and contraception. In the past Turkson has not ruled out the use of condoms but advocated abstinence and fidelity, and treatment for HIV-infected people above spending and promoting the use of contraception.
"In matters of scripture and morality, no leader of the church comes to change anything," said Palmer-Buckle. "But in pastoral matters, that is where the church has been much improved. When dealing with homosexual activity, it is morally wrong. The truth must be spoken but it must be spoken with compassion."

As prefect of the Congregation for Bishops, which oversees the handing out of mitres, the multilingual Canadian cardinal Marc Ouellet is one of the most powerful men in the Vatican. The 68-year-old former archbishop of Quebec, who was appointed to the third most important job in the Vatican three years ago, has the power to make or break careers. His position makes him a natural candidate for the papacy, although he was careful to downplay any talk of promotion when he was chosen to lead the congregation in July 2010. "I'm surprised to be today in this position," he said at the time. "And I don't think that I will become a pope someday, I don't think so."
Born in Quebec in 1944, Ouellet studied at Laval University, the Grand Séminaire de Montréal and the Université de Montréal before being ordained in May 1968. He has spent many years living and teaching in Colombia, which would make him an attractive figure to Latin American Catholics should one of their number again be passed over as pontiff. He was ordained as bishop by John Paul II and is seen as a close ally of Benedict XVI.
Despite his reputation as a traditionalist, in 2007, Ouellet issued an open apology for the church's pre-1960s attitudes, saying they had contributed to "anti-Semitism, racism, indifference to First Nations and discrimination against women and homosexuals" in Quebec. Three years later, however, he caused outrage after telling an anti-abortion conference in Quebec City that aborting a pregnancy was a "moral crime", even in rape cases.

Francis Arinze, who was born in Eziowelle, Nigeria, on 1 November 1932, has long been touted as a possible pope. Although his parents worshipped Ibo deities, Arinze – one of seven children – was sent to an Irish missionary school and soon set his heart on becoming a priest.
He was ordained in 1958 and went on to teach liturgy, logic and basic philosophy at Bigard Memorial Seminary at Enugu in south-eastern Nigeria and study at the Institute of Pedagogy in London. He was 32 when he was consecrated bishop on August 1965, and became archbishop two years later. Arinze witnessed the horrors of conflict first-hand during the civil war between Nigeria and Biafran secessionists, and was later asked by John Paul II to lead what is now the Pontifical Council for Interreligious Dialogue, which is responsible for managing the Vatican's relationships with other faiths.
His ability to get on with those outside the Vatican has been widely praised, with one colleague remarking of his charm: "The beautiful thing about the cardinal is that he can say the hardest thing with a smile on his face and not offend people." However, even the great communicator is sometimes unable to read his audience. During an appearance at Georgetown University in Washington almost a decade ago, he was booed for equating homosexuality with adultery and divorce, and claiming such sins mocked the family.
John Paul II made him cardinal in May 1985, cementing his rapid rise through the Roman Catholic ranks. He was hotly tipped to be the first African in 1,500 years to sit on the throne of St Peter in 2005, but was beaten to the post by Cardinal Ratzinger.

The election of Angelo Scola as Benedict XVI's successor would delight Italians keen to see one of their own back on the papal throne after Polish and German popes. Scola, the son of a truck driver, was born on 7 November 1941 in Lombardy. Ordained in 1970, he holds doctorates in philosophy and theology and was professor of theological anthropology at the John Paul II Institute for Studies on Marriage and Family. He was appointed bishop of Grosseto in 1991, patriarch of Venice in 2002, proclaimed cardinal in 2003, and appointed archbishop of Milan in 2011.
In spite of his place at the top of the Vatican hierarchy and his academic pedigree, he has urged the church to do more to appeal to the modern world, arguing it needs to build on the second Vatican Council of the 1960s, which proved a landmark moment in Roman Catholic history. An ardent believer in the church's role at the centre of society, Scola has publicly bemoaned its inability to clearly communicate its message on matters such as marriage.
"One reason for the misunderstanding is that we Christians often propose this moralistically instead of giving reasons, instead of convincing," he said in 2005. "This is a weakness of ours."
• This article was amended on 13 February 2013. The original said that Cardinal Angelo Scola was appointed archbishop of Milan in 2002, rather than 2011. This has been corrected.

Paulina Opoku-Gyimah says: In my mind lovely Cardinal Peter Turkson is the next pope but will this ever happen? The world is ready for him but is the Vatican? I pray they are!!!
Do watch his interview on the BBC via: http://www.bbc.co.uk/news/world-africa-21417062
P.S I don’t know, watching the charming, eloquent Cardinal Peter Turkson, I don’t know!! He seems tooo happy, toooo alive, –way toooo alive for the papacy.. I don’t know…. but don’t they tend to be at death’s door before they are elected to the papacy???? Whatever the outcome, God Bless him, he’s a lovely man and reminds me of my uncle Ababio!!!